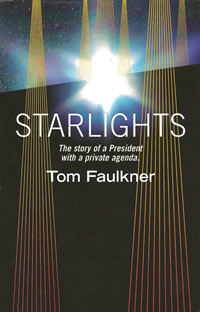 Grover “Bull” McGar is the only dual Medal of Honor recipient in American history and his brother, Kelly, once the show-runner of a successful political expose series, has become a failing television journalist due to the disappearance of his wife. When Grover is elected President of the United States, he places Kelly as a high ranking official in the CIA in an effort to help rebuild his life.

While learning the ropes, Kelly uncovers a deadly secret- the launch of a frightening, hi-tech weapons system from Russia. The projects name: Starlights. As Kelly digs deeper, a series of assassinations, betrayals and a daring mission deep into the Siberian wasteland lead him to believe the Russians are preparing to re-establish their foothold as a superpower in the world. After President McGar decides to hold off political action due to his upcoming Peace Agreement, Kelly realizes he must take things into his own hands and discovers a conspiracy that reaches all the way to the White House. A heart-pounding mix of action, suspense, intrigue, and espionage, Starlights brings the new age of the action/thriller to the literary world.